Transparency – Or Maybe Not 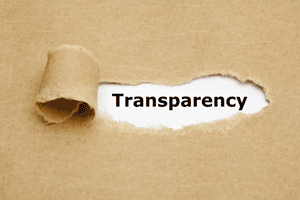 We’ve been receiving notes from friends about recent articles in a trade magazine. The articles have one thing in common: proclaiming that transparency is the way to go when selling construction services. Transparency is the new buzzword; at least, this magazine is trying to make it a buzzword. In their opinion, you should be disclosing your financial details to your clients when you present your price.

The odd thing is that in every article, the title and subheading don’t support what’s written. For instance, one article is titled “Remodeling Pricing: From Opaque to Clear.” The introduction states, “We spoke with four remodelers from around the country and, as they see it, the dilemma is a big blinking arrow pointed at an obvious solution: The need for more transparency.”

You’d think there was a major move underway to make the details behind our pricing more clear to consumers. That’s not what the article says.

The first two contractors in the article support some form of disclosing line-item costs, while the last two don’t offer line-item costs and don’t encourage it. One of the last two commented, “The ultimate goal, however, is not to give the full breakdown . . . It means being a better salesperson and learning how to understand and map what homeowners want.” The other stated that “the clients who harangue him about price breakdowns are the same clients who only care about price.”

Another article is titled “Construction Project Bids: Transparency and the Numbers Game,” with a subheading, “On home improvement estimates, feeling ripped off, and transparency.” The article is actually about the importance of making a good presentation in sales, not about transparency. Why did the owner feel ripped off when they were given a quote? It didn’t start with a lack of transparency, it started when the salesperson didn’t provide adequate information when they quoted a price.

In a third article, the writer is a specialty contractor. He’s actually one of the four interviewed in the first article who supports giving line-item costs. The article subheading reads, “The more detailed and transparent you are in your bid, the more likely you are to get a signature on a contract.”

The contractor explains how he spent the time and effort with the client to explain what they would be getting for their project. From the article:

“First, there’s detail. A scope of work that elaborates everything that will be done and how it will be done. Second, transparency. We break out every product we’ll use. We have a thumbnail picture next to the product. There’s the unit of measurement—square feet vs. linear feet—and the unit pricing. So ‘Hardie lap siding in Booth Bay Blue?’ This is how much you’re paying. In addition, there’s a description of how that product will be installed. All that’s in the contract. Using visualization tools, the customer knows what his house is going to look like . . . He’s not just hoping it’ll look good, he knows it will.”

I’ll contend that he made the sale because he provided details, giving the homeowner the security of knowing what they would be getting for their price. It wasn’t because of the transparency provided in the unit pricing. The more detailed you are, both in your presentation and in your contract, the more likely you are to get a signature. Transparency has nothing to do with it.

Why are we suddenly reading so much about transparency? You’d think an industry magazine would be looking out for contractors. Instead, the editors are promoting transparency as the best thing for consumers. Their thinking appears to be if we give homeowners everything they want, contractors will win.

That’s wishful thinking. Transparency isn’t the wave of the future, even if the magazine editors want to make it so. The most vocal contractor supporting transparency isn’t that transparent. They play a numbers game, moving what is often considered overhead into costs. Clients can see the details on specific job items, but the remaining costs of the project appear to be far from transparent.

I’ll contend that the definition of transparency is changing. At one time, it meant opening your books. Now, it might mean itemizing your estimates; giving a line-by-line breakdown of what you’ll do and how much you’re charging for that line item. We’ve discussed transparency and itemizing estimates many times; you can read our opinion here, here, and here. I’ll summarize our opinion: both itemization and transparency cause more problems than they solve.

Then again, maybe the newest definition of transparency is presenting a clear and detailed definition of what you’ll do. That means walking through a sales presentation that explains what can be done for the budget provided. It includes writing a detailed contract that includes a detailed scope of work. If that’s the case, I’m all for transparency. We’ve talked about these things many times, and much of it is in our book, Profitable Sales, A Contractor’s Guide.

And I’ll repeat what I’ve said before: be careful who you listen to. Just because it’s a construction industry magazine doesn’t mean it’s looking out for construction business owners. It looks to me like they’re using their platform to promote their own pet beliefs, not to discuss what makes your business stronger or better. That’s not what you need, so don’t bother giving it your time.

This website uses cookies to improve your experience while you navigate through the website. Out of these, the cookies that are categorized as necessary are stored on your browser as they are essential for the working of basic functionalities of the website. We also use third-party cookies that help us analyze and understand how you use this website. These cookies will be stored in your browser only with your consent. You also have the option to opt-out of these cookies. But opting out of some of these cookies may affect your browsing experience.
Necessary Always Enabled
Necessary cookies are absolutely essential for the website to function properly. These cookies ensure basic functionalities and security features of the website, anonymously.
SAVE & ACCEPT
9
0
Would love your thoughts, please comment.x
()
x
| Reply
Scroll to Top