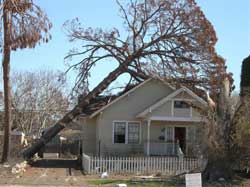 A friend/client of ours recently had two disasters in her two properties: water damage in one and fire in another. She called her insurance company first and they drafted an estimate and issued her a check pretty quickly. They then told her to find a contractor so she called us. We looked at the numbers from the insurance company and immediately knew that they were drastically low so we explained to her that we would price the project and she would have to take our estimate back to the insurance company to see if they would cover what it would actually cost to make the necessary (extensive) repairs.

She was really nervous about this, believing that they had already determined how much they would cover but we assured her that they should be responsible for the full costs. After working out our job costs and markup, our estimate was just over double the amount that the insurance company had paid out for the water-damaged property. Which of course made our client feel even more nervous about the whole thing. But since she is a repeat client and a friend, she trusted us and sent our estimate to the insurance company.

They issued her a check for the difference on the same day!

This is not the first time we have encountered this scenario and since she is planning to work with us on her other fire-damaged property, we imagine that it won’t be the last time.

Our client went on to say that she wanted to share that because she’s concerned contractors are taking on insurance jobs at the insurance company’s estimated prices and incurring losses. She’s probably right, especially those who don’t do a lot of insurance work.

The second experience isn’t as positive:

We actually had another insurance job where the client had already hired us and we had started the job and their insurance company’s adjuster suggested that they change contractors because he knew someone who would do the work for the prices estimated by him (which were again about 50% of what it would actually cost). In that case, it really felt like the trust between us and our client was really damaged for the long-term even though they chose to stick by us for that project.

How you respond to what the insurance company adjuster says will largely determine if there is any damage to your relationship with your customer. You first need to explain why the adjuster’s quotes are so low.

Sadly, it didn’t take them long to discover that the cost of repairs was more than they’d anticipated. So what did they do? They took it from the companies that did the repairs by deciding to only pay 10% overhead and 10% profit on their losses. The insurance companies and their adjusters know that no contractor can run a casualty repair business with a 10 and 10 overhead and profit margin, but they don’t care. They’re going to get their claims settled as cheaply as possible to protect their bottom line.

Now look at it from the adjuster’s point of view. The lower they can get a claim settled, the better they look to their boss and the company as a whole. So, when they do a scope of repairs, they’ll leave items off the estimate that should be included and use the 10 and 10 markup trick and hope the owner and the contractor miss those misses. If they can smoke it by the owner and get them to settle for the adjusters estimated amounts, they’re money ahead. If their low estimate gets found out, they simply pay the difference as they did in the above case.

If you’re doing insurance repair work and run into an adjuster who says you’re overcharging, you need to explain how insurance works. At the same time, explain that your job is to get the home or building back to the way it was before the loss.

Don’t worry about looking bad to your client if they’re told by an adjuster that your price is considerably more than another contractor’s price. Instead ask your client, “How are they going to do the entire repairs on your home for less than my cost? Is that really the type of company you want repairing your home?”

Let me close this with some advice for those doing restoration work. Ask for the adjuster’s scope of repairs up front. Then do your own estimate and compare your estimate to the adjuster’s. See what they left off their scope of repairs, and make sure you haven’t forgotten anything. Put the two together and you will probably get real close to an accurate scope of work.

But don’t cut your prices for any reason to match the insurance adjuster’s prices. I’ve been involved with insurance projects since the early 70’s and I’ve seen very few accurate estimates from adjusters. Get the money you need to do a good job for the folks, pay your overhead expenses and make a profit. If you can’t, my best advice is to simply walk away from that job.

Get three other contractor estimates and show the adjuster. Always get your price. Following the 1.95 markup rule has made us choose quality always.

In my previous life, I stopped even pricing insurance work.I am now doing restoration work and it is a speciality that you need to wrap your mind around. Like everywhere there are good people and not so good ones. Most adjusters will work with you to ensure the work is completed well and you can make a dollar. There are tricks we use, like “missing items” on the estimate that help everyone in the trade. However they make it hard for “outsiders” to take the work.The markups are all over the place from 10/5 to 34/8 that I see with… Read more »

Excellent article. One other tip is to get your estimate to the adjuster before he completes his whenever possible. That way he can save face by using your numbers in his estimate. He will likely still be lower but not as much and you will be helping him do his job so he will be more likely to settle fairly with you. When he says “We don’t pay for that,” just agree and tell the adjuster politely you are sure their insured won’t mind paying the differences out of pocket. He will most likely concede.

Royal Caribbean cancelled all U.S. cruises through the end of April. Those who signed up with either receive full refunds or future cruise credit, their choice. We’re considering other options, and will try for a cruise again in 2022.