It’s time for some tough love today. The note below (lightly edited) was posted as a comment on another article; we’re addressing it here because the situation isn’t unique. 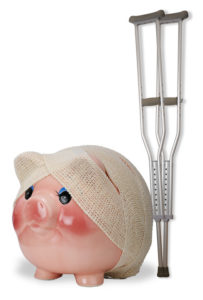 I’ve been working for a new customer for 2 months trying to repair her rotten windows, leaky roof, everything. Because of the nature of the job it was impossible to price so we agreed on a day rate. I supplied the materials and gave her the receipts including my 20% discount to help her. Also I used some of my own timber free of charge and just to help.

From day one I’ve been messed about getting my wages. There’s always been an excuse. It ran up to £1800, I’ve got it down to £500, that was 5 weeks ago. At the time I told her I was not going to carry on working till I’ve been paid up to date. She refused to pay me all of it even though I’ve already worked these hours. I pulled off the job and she still hasn’t paid me, excuse after excuse, she asked for a itemized invoice, don’t know why she’s had my hours of work and the receipts. Can anyone help please.

Sadly, it’s not uncommon for a client to refuse to pay what they owe. It happens far too often. But the contractor brought this problem on himself. It could have been avoided with a written contract and a fixed price estimate.

I appreciate his heart and his desire to help someone in need. But you’re in business to provide a service and make a profit doing it. You aren’t in business to help people save money.

Business and charity are two different enterprises. With a charity, donors willingly fund work that needs to be done. With a business, if the client can’t fund the work, the business owner will. If you’re a business owner and you take on a project out of the goodness of your heart, recognize that you might not get paid and you’ll be the one funding the project. If you can’t afford to fund the project, don’t do it.

This project could have and should have been priced. I haven’t seen a job in my entire construction career that couldn’t be estimated. Granted, there will be some qualifiers such as allowance amounts, and it’s possible a demolition and discovery contract would be needed, although in a case like this it’s a fair bet that everything behind the walls is damaged as well.

It’s easy to say “it can’t be estimated”, or “let’s do a cost-plus contract”. Estimating is hard work, but it’s not as difficult as repairing someone’s home and not getting paid for your time. It takes time to learn how to estimate, and it requires discipline, but it can be done. It’s a matter of educating yourself on good estimating procedures and practices.

Working on a “day rate” seldom works out. The client doesn’t know what the final price will be, and at some point they realize they’re spending more money than expected. They’ll blame it on you because your rate is too high, and that’s when they begin looking for reasons not to pay. It doesn’t matter how nice you are; when they run out of money, it’s your fault. You’re the one who will lose.

The client tells you what they want, and you tell them the price. You do the job according to the contract and get paid accordingly. Now you can provide for your family and pay your own bills. That’s how the world works.

At this point, the only recourse the contractor has is legal action, and without a written contract he might not prevail. Wherever he is located, he needs to check the lien laws and take the steps necessary to file a lien if possible. If he needs an attorney to help, then get one. No more Mr. Nice Guy. The longer something like this goes on the harder it will be to collect the funds.

He also needs to read Markup and Profit; A Contractor’s Guide. He’ll find all the reasons he shouldn’t have gotten involved with this job in the first place.

Tough love, but this situation happens far more often than it should. As a business owner, you need to spend as much time educating yourself on how to run your business as you’ve invested in learning how to do your trade. The more you know, the fewer problems you’ll encounter and the better you’ll succeed.

“Winning is great, sure, but if you are really going to do something in life, the secret is learning how to lose. Nobody goes undefeated all the time. If you can pick up after a crushing defeat, and go on to win again, you are going to be a champion someday.” — Wilma Rudolph