A contractor asked us about an issue they are having with an owner regarding the quality of a job. 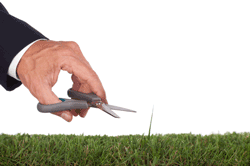 We recently had a client that we did an unusually small project for, we renovated his shower only. When the project was essentially done and after the heavy glass was installed, he decided to let our project manager know that he was not happy in the quality of the tile work.

There were a half a dozen tiles on the wall and a few on the floor that he felt stuck up higher than they should. After walking through with him and showing him the variation (even in the tile itself) was certainly within an acceptable range he refused to agree and stated that the work was not up to his quality level. He proceeded to state that the only solution he would accept is for us to rip out the tile on the walls and floor and redo essentially the whole thing.

When we explain to him that that was not a reasonable solution and that we would work to fix the individual tiles to his satisfaction, he refused, told us that he would not pay the bill, and that he would go online and do as much damage possible. He felt that we were essentially the ones cheating him.

With the power of the Internet, gone are the days where you can give a severely unreasonable client several thousand dollars off their bill to make them go away. We have always said that these are the worst clients because you simply can’t reason with the unreasonable, and they seem especially eager to assert their power behind a keyboard. We explained to him very nicely that ripping out and redoing the shower will most likely produce albeit different, but very similar results. In other words, improving to this level of “perfection” is not a reasonable expectation that we could meet. So the idea of spending a significant amount of money to do this would only put us further in the hole and still with a client who was unwilling to accept the results and is already threatening to not pay us the outstanding balance due, not to mention the potential damage he could do online, for a lousy $14,000 job.

I’m wondering what Michael would say about unreasonable clients who insist on doing it their way and threaten to not pay you and spew their venom online?

When you’re in business, you’re going to get difficult people, and this sounds like one of them. This owner knows just enough to cause trouble for both you and your business.

At this point, it’s time to bring out the Residential Construction Performance Guidelines, published by the National Association of Home Builders. This book is the best source I know of for quality guidelines. It can be purchased from NAHB. Your client might not believe you when you say that the tile variation is within an acceptable range, but they might be willing to believe a professional publication.

Then again, they might not be willing to accept the guidelines outlined in that book. That’s why it’s important to include the following language in your contracts. Then, when they tell you that your quality is no good, your response can be, “Let’s see what the contract says about that.”

Owner understands and agrees that #CONTRACTOR NAME# will use the book, RESIDENTIAL CONSTRUCTION PERFORMANCE GUIDELINES, version #SPECIFY CURRENT VERSION#, published by the National Association of Home Builders, to set the quality standard for this job.

Owner understands and agrees to this procedure to keep the job on schedule and not hinder the job progress by #CONTRACTOR NAME# in any way. Owner will not withhold scheduled progress or final payment while this issue is being resolved.

If you’re so inclined, you might also add the following language to your contracts:

Owner agrees that any issues that are outstanding will not be discussed or reviewed in any way with any other parties except legal counsel.

Some owners start disputes because they don’t want to pay their bill. Others enjoy the conflict, or are just so sure you’re going to cheat them that they need to find something to complain about.

Whatever the reason, you want to preempt conflict by writing a clear contract that covers these issues ahead of time. They can argue with you, but they can’t argue with a signed contract.

“Expect the best. Prepare for the worst. Capitalize on what comes.” — Zig Ziglar

NAHB is okay for laymen but for technical professionals the only standard they will use are the one’s recognized by the industry – ASTM, ACI, NFPA, ISO/ANSI. As some provisions in NAHB are questionable and sets up the contractor in trouble for technically competent clients. The fact that they are already covered on a project’s technical specificatons (no matter how small a project) forming part of the contract document should suffice, we can retain the arbitration clause and the closing clause. And that arbitrary person will more likely be a technically competent architect or an engineer. So in saying, who… Read more »

I know its not always easy to spot but many potential customers give tell tail signs at the initial meeting they are a P.I.T.A. Run!!
I actually have a mental list of certain professions that I hesitate to work for. I wont post that list here so not to offend but many do not understand our physical world where (stuff) happens no matter how hard one tries.

If the tile was so warped that lippage could not be avoided, why was it installed?
We’re the floor and walls prepped to make sure they were flat within standards outlined in the Tile council of North America. I’m sorry to say, your client is more than likely correct.
Prep is everything in the modern tile world.

So the language, “Owner agrees that any issues that are outstanding will not be discussed or reviewed in any way with any other parties except legal counsel.” should prevent them from posting unfavorable reviews. But, should there not be a recourse penalty for loss of work due to the unfavorable review on work that is still being debated?

Tantamount to slander or libel. That in itself is legal action.