How do you deal with a dishonest client? A client who knows all kinds of ways to cheat an honest contractor out of monies rightfully due. A client who actually enjoys doing it and it’s a game for them.

I recently corresponded with a contractor (Garrett) concerning this issue. His first note to us:

“Howdy Michael, I subscribe to your newsletter and I read your markup and profit book. I’ve been in construction with my dad or with other contractors one way or the other since I was about 14 years old and in that time had lots of hard lessons as well as good.

One lesson I’ve learned the hard way, as many have, is the value of getting paid and protecting your ability to be paid. And I do subscribe to your idea that a final payment should never exceed more than 3% of the total job value. It’s been a while since I’ve been stiffed but I’m currently in a scenario where I’m looking at walking away from about $2000 off of an $87,000 job.

The guy is a big-time construction manager on big commercial and government projects, and no matter what I do in sending him my final bill he’s just giving me a stonewall of ‘I don’t understand it and I won’t pay it until I do’. Now I bill the same way for laypeople as I have for this client and I get nothing but praise for my system. I also turned my whole structure upside down just to satisfy his Excel spreadsheet madness and still I get no response.

So I guess my question is, with the idea that I’m not really sacrificing more than I’m willing to sacrifice, should I just walk away from it? Or should I go ahead and do a small claims court process and lien. Because the only reason I want to do a legal battle is simply because he’s a bully. He spends all day on the phone screwing subcontractors out of little bits of money here – little bits of money there on these larger projects. We’ve heard it time and time again at this point, something I didn’t know about him obviously before I took the job. And now I fear I’m gonna become the same victim of his tactic and the reality is he has plenty of money and time to just string me along forever and ever. Even if I win, I’ll be the one suffering, not him.

My real fear is not that I’m not justified but that in the end I’m just poking a sleeping bear; if that makes sense.

What do you think?” 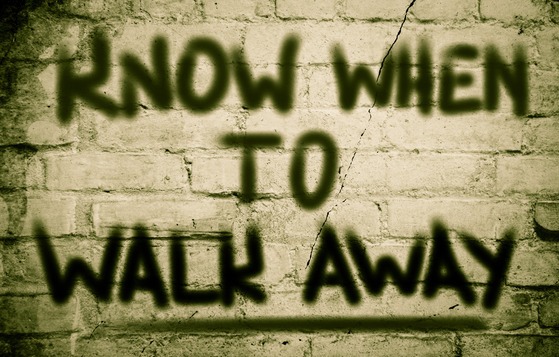 What do I think? Go after him. Fight. I don’t like bullies and I don’t want them to win. I suggested he file a lien against the property.

“The last time I liened some one was during the housing crisis. I had all my ducks in a row, the client was actually on my side because he knew he was going under and wanted me paid any way possible… 10 mo and 45k in legal fees later I netted 15k out of 300…

I’m physically sick about going through that again.

That’s my hesitation. This is way smaller but the emotional impact on me and my family through me will be enough to not be enjoyable.”

I have to admire the way he keeps his cool. I still wanted him to fight, because it appeared he had a good chance of winning. That’s when Garrett showed me another point of view.

“I never walk away from money. I have argued with clients over less. But my gut tells me that on this one… If I fight it and win I’ll still be losing. Maybe I don’t lose money but I lose sleep and quality of life and that emotional energy that goes into doing all that. That’s what I’m not sure I want to risk. I mean even just in dollars – if fighting it to win and that costs me 20hrs of my hours selling or working… At $50 bucks an hour that’s 2k right there.

I’m really just frustrated and discouraged I think. I really liked these people. Both husband and wife. And never saw myself being treated like this by them. It’s just got me bummed, on top of the sick feeling I get by being dragged into the emotional battle it will be once I drop the lien hammer. Or at least the battle I suspect it will be based on his phone conversations with contractors and his bragging about how much he got out of this guy and that guy.”

The more he writes, the more I like him. He deals with issues the way a good business person should. His thinking is clear. He’s trying to do what is best for his family and himself and his company.

I have to admit, we’ve had discussions like this in our household. I don’t like backing down and will take on any fight if I know I’m right. Devon is the pragmatic one, she’s the one who reminds me that it’s not always about winning, we have to consider what it costs to fight.

That doesn’t mean I take losing lightly. My response to Garrett:

That will transfer the losing sleep from you to him and his wife. Oh joy.”

One last note from Garrett:

“That’s kind of what I thought today. My dad did that only one time… The dude paid him the next day.

I believe my dad phrased it like, ‘it’s obvious that with your Mercedes Benz and Gibson guitar that you can’t afford the final payment on your remodel project, to which you agreed. So I’ll write it off and call it charity to a good cause for a family so hard up for money they can’t maintain their life style.'”

In retrospect, I should have agreed with Garrett right away and told him to let it go. If he did a good job of estimating and used the correct markup for his company, he made money on the job even without the last payment. I tend to dig my heels in when I don’t think I’m being treated fairly, and sometimes that’s not the best approach.

Garrett will do well. He keeps his head and is focused on taking care of his family, himself and his business. He understood that the emotional cost of pursuing this claim is more than the financial gain of winning.

What could he have done to prevent this from happening? Sometimes you can’t prevent it. I don’t know all the details of his contract or how he approaches his jobs, but there are things you should be doing on every job to protect yourself in case it happens.

Thank you, Garrett, for letting us share this conversation. I’m sure the frustration you experienced and the thoughts you’ve shared while trying to resolve it will sound familiar to others. When we say, “We like to see the good guys win,” it also means we want to see the bad guys lose. Sometimes you win by walking away and letting fate take care of the bad guy.

“Anger is a wind which blows out the lamp of the mind.” — Robert G Ingersoll