Oh joy. Another new service that connects homeowners with contractors for the purpose of helping homeowners get the lowest possible price on their home improvement project. We’ve discussed these services before. (Last fall and April 2015.)

A company that compares itself to Priceline or Angie’s List isn’t going to help contractors. In the long run, I don’t think it’s going to help homeowners much, either. 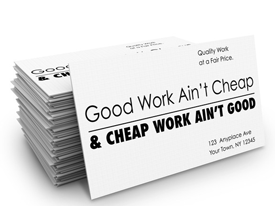 Right now their focus is specialty work: HVAC, plumbing, flooring, roofing, painting. They are about to add bathrooms, which will be a little more interesting, because the unique twist they have is that they estimate the project online. From their website, speaking to contractors:

“Contractors pre-load their pricing policies for the services they offer once, which allows them to automatically generate custom quotes over and over again for interested homeowners. Every quote can be reviewed by the contractor before committing to a project, so there is never any risk when using ServiceWhale.”

Who knew estimating could be so easy?

It’s easy for homeowners, too. They create an account, request a service, look at quotes that are available immediately, and choose their contractor. But that’s not all. From their website, speaking to homeowners:

“Negotiate a great deal. Every price you see on ServiceWhale is negotiable. If you think you can get a better deal, send the contractor your best offer.”

Why would a contractor get involved? In the article, they state that “ServiceWhale’s developers have found that contractors – most of whom are small businesses – also are enthusiastic about the matchmaking help, citing the benefit of promising leads without the typical hours-consuming process of visiting potential customers to provide estimates that often don’t result in actual work orders.”

Contractors are getting involved so they can get leads and make sales without having to talk to homeowners. That’s a mistake. Look at the cost. ServiceWhale’s terms of service requires that pricing on ServiceWhale be at least five percent lower than the contractor’s standard pricing. Contractors also agree to pay ten percent of the sales price to ServiceWhale as a commission.

With a minimum five percent discount, a ten percent sales commission, and a negotiable price, it’s going to be tough for a contractor to make money on the jobs generated by this service. It’s obviously expected to be a money maker for ServiceWhale, however; they’ve received $2.5 million in backing from an international group of six angel investors.

Construction is a cost-based business. It’s a service, not a commodity (like shoes), and every job is different. The price of a job needs to be based on the cost of a project, plus a contribution to your overhead expenses and a minimum profit. Your price can certainly go higher than that, but if the price is lower than what it takes to pay job costs, overhead expenses and a minimum profit, your business will suffer. If you do too many jobs below that point, your business will fail.

Get a website and stay in charge of your marketing; it’s less expensive and more productive than any lead generating service. Qualify clients on the phone before you visit them. Learn to sell, and get paid for your estimating efforts. You don’t need practice building cheap jobs, you need clients who understand the value of your work in their home.

The article describes the impetus for the company:

“It started as my own personal frustrating experience with home improvement,” said founder Dmitri Saveliev.

The 45-year-old Princeton resident, who has an extensive Silicon Valley background in information-technology development, needed a new heating and air conditioning system for his 2,000-square-foot home.

His search for contractors to install one – compiled from neighbors’ recommendations and big-box stores – required meetings at his home that would last an hour or more, often with a salesperson rather than someone who would actually do the work.

Maybe this service will be a good deal, after all. The rest of us won’t have to waste time with the “give me the cheapest price” homeowners. They’ll be buying their services from ServiceWhale.

“I pity the man who wants a coat so cheap that the man or woman who produces the cloth will starve in the process.” – Benjamin Harrison