What Do You Believe?

Contractors by their nature are usually strong-willed, self-directed individuals who make their own path in life and in business. That’s good. It’s what gets them up and going in the morning and keeps them focused on what needs to be done. That strength also leads them to think that just because they believe something, it’s true. There are two beliefs that a lot of contractors put absolute faith in that can cause problems in their business. 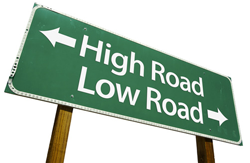 “My business is different.”

I think they often use the phrase to separate their business from other construction businesses.

It can help to separate yourself from some contractors by doing things right: returning phone calls, showing up on time for appointments, keeping jobs clean, doing what you agreed to do. That’s running your business like a business and not a hobby. But it doesn’t make you different, it makes you normal. You’re doing what you’re supposed to do. You’re a business owner. It’s what’s expected. The flakes are the ones who are different.

When you talk about yourself and your business, focus on the positive things you do and can provide. Don’t talk about the other guys, which is what you’re doing when you say you’re different. Remember that everyone’s radio station is tuned to WIIFM – What’s In It For Me. Do they care that you’re different? No. They care what you can do for them. Focus on that.

“I work in a competitive market.”

I hear this almost every day. Guess what? Everyone works in a very competitive market. If you’re in construction, chances are good that you have all kinds of people around you who do what you do. Most of them can build the same job you can build. That’s reality.

When you say that you work in a competitive market, your focus is on price. Isn’t that really what you’re saying? You have to reduce your price or use a lower markup because there are other people doing the same work, and they only way you’ll get jobs is if your price is lower.

You can’t win that game. If you’re marketing to the right people, their major concern isn’t getting the lowest price unless you make it their concern.

It’s not easy learning to sell, but it’s a skill that can be developed with practice. The sooner you start practicing, the sooner you’ll become a profitable salesperson.

Other contractors are out hustling business just like you. Some are focused on price and fall into the trap of trying to be competitive. When you visit a potential client who just spent two hours with another contractor hearing how low their prices are, you have an excellent opportunity to turn the client’s focus back to what really counts, and that’s the value you provide.

“Whatever the mind can conceive and believe, it can achieve.” – Napoleon Hill

I have to be honest and say that although I completely line up with this, lately I am having concerns. While I don’t want to be in the race to the bottom, i don’t know that I can outlast the huge numbers of guys that are. We have a very strong reputation and for that we get lots of calls and we screen them carefully. The truth is we are losing to price more and more in the current economy of our area. I don’t sell on price and I am very clear about that. I don’t “bid” jobs per… Read more »

Right on the money!
I just sat with a potential client a few days ago, and when she steered towards “If the price is right”, I told her that I don’t expect to be the lowest bidder, I expect to be the contractor who gives the best job!
If I get the job it will be my reputation, not my price that drives it!

Excellent Post Michael, I feel that a good path to follow isto make your business distinctive. As business people we should always rememberthat we are all here to do good things, for other people. When we do goodthings, people notice. Good things could be as simple as answering the phonewhen clients call, returning calls or e-mails promptly, keeping schedules andtransactions transparent so that the client is always aware of what is going onwith their project, dealing with problems quickly and to the satisfaction ofthe client, and the list goes on and on. When people notice they feel good about their… Read more »

As usual, you are right on! Simple adjustments to a thought process can make a huge difference in the culture of a business for everyone.